I was finding places to dine in Seoul and I didn’t want to go the usual route with a specific standard cuisine so I was shortlisting a list of restaurants and eventually decided on Muoki (KRW160k for dinner). Located in Gangnam area, the restaurant was a short walk from the subway exit. You wouldn’t miss the entrance with the bright furnishing and as you head up to the second floor, you are welcomed into a small and cozy space with an open kitchen

The place was crowded, full house in fact, which was surprising cos when I made the booking via catchtable, it didn’t feel like that popular to me. lol

I felt lost when I first sat down cos the menu took quite some time to come (like am I supposed to ask for it? I don’t remember being a standard omakase course! lol), but I realised this was their way of allowing diners to be settled and relaxed before dinner commenced. I was primarily served by the manager who was excited to hear I was from Singapore cos he had worked here 7 years ago. I was glad we had something to talk about. lol

I was recommended to have the asparagus first, followed by the beef, and in one bite. The asparagus was refreshing and crunchy and you could taste the sweetness of the vegetables. I love how they added bits of cheese in it so that it gave a more complex flavour. The beef tartare with seaweed chips was good. You could taste the texture of the sweet beef together with the crispiness of chips 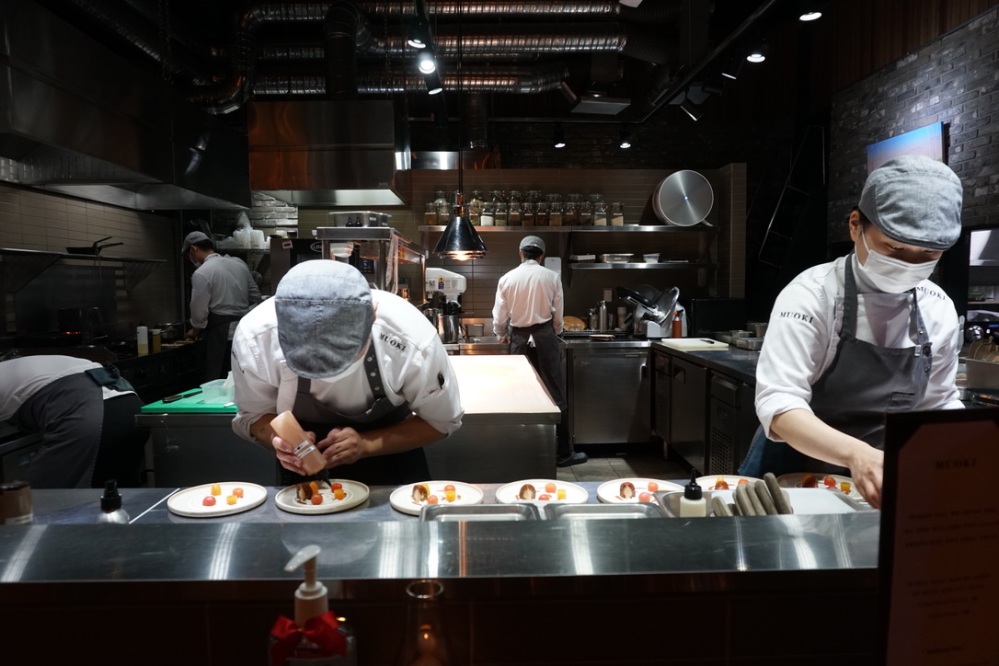 I really enjoyed seating at counters where I could watch chefs at work. And at some point I felt like they were so stressed cos they had to put everything together on time

Such a beautiful plating

Never tasted something like this before. The tomatoes were really fresh and the sweetness went well with the olive oil and goat cheese. The goat cheese was light but not too overpowering, to the point I thought it tasted like a light cream sauce. As I ate, my eyes widened in amazement at how delicious this dish was. So simple, but so extraordinary 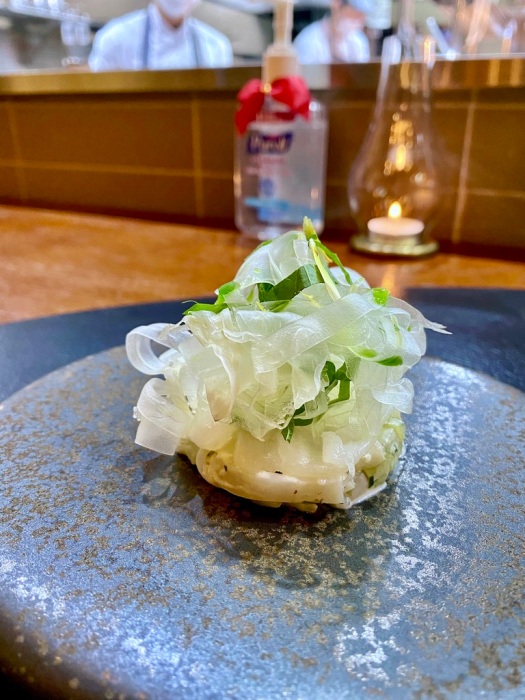 Named Ocean, this dish really tasted like having something fresh out of the ocean. The sea bream was sweet and fresh but I thought what held the whole dish together was the creamy sauce. It was a dish I wanted to take a second bite

Ordered a glass of house white to start and it paired even better with Ocean. I was amused they gave so much for a glass, that I couldn’t even order a second glass

Just a decent bread which tasted amazing with the salt and butter. You need to have the salt AND butter together. It was delicious

The least impressive dish. I couldn’t quite taste the lobster in it. To be honest, if you had used prawns as the protein, I wouldn’t be able to tell the difference. And the skin was a little too thick. It was smart to top a beetroot on top so the whole dish didn’t feel too heavy

Felt like all restaurants have their own version of egg. lol

What we had there was a combination of onions, mushrooms, foie gras cooked with chicken liver stock and topped with truffle cream sauce. So much flavours packed into one. It was delicious and the portion was just right. Any bigger and I felt it would be too much. The whole combination worked well, and the truffle cream sauce led the race

And I was full by this point

This dish felt like a resting point. Like just finish and move on to the next dish. It was not bad, but nothing impressive either. I was just looking forward to what was going to come next already

Came in the form of ginger, pear & rosemary. The manager told me to do this in one shot, and even jjang with me. lol

It was refreshing and definitely something different as a palate cleanser, so much that I wanted another glass of it 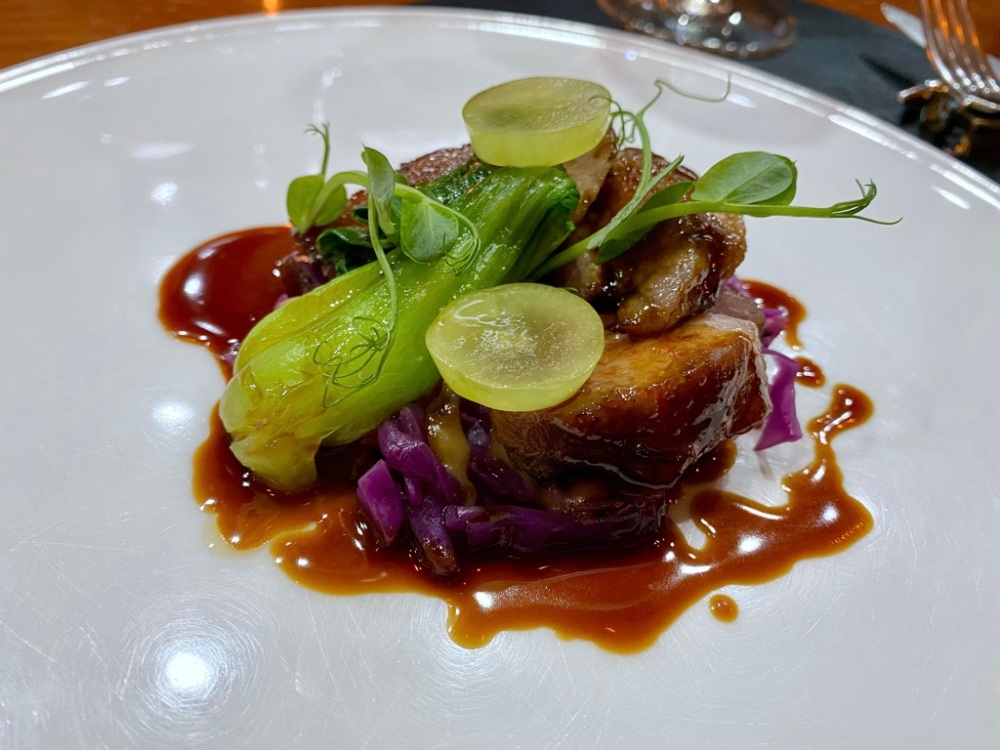 The pork was melt-in-the-mouth. Never thought I would say this for pork but wow the fats and the meat was delicious. I love the slight charred taste of the protein and the combination of the red cabbages and grapes was a good one to go along

Even choosing the tea had to be fancy. I went for the special white tea and I thought I made an excellent choice. lol 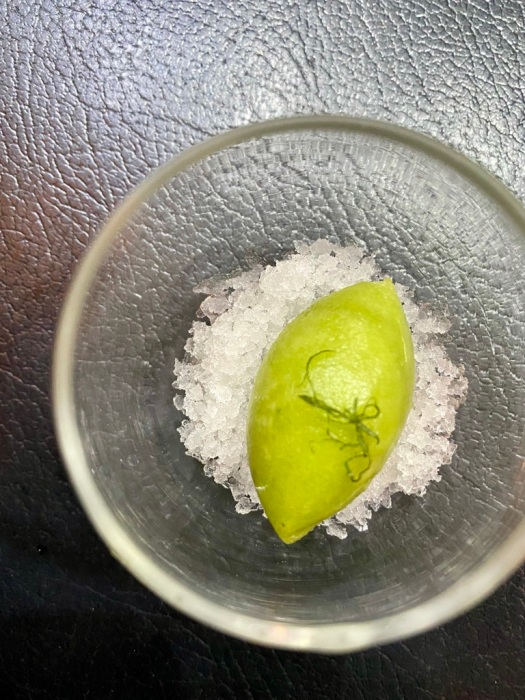 It’s probably not a uncommon combination but I like the creativity that was put into this –  that when you eat everything together, it tasted like mojito

Dessert came in the form of banana icecream, banana chips, creme brûlée, banana cake, white chocolate and dark chocolate meringue. You have thought it would be a single profile of sweetness but to my surprise, there was varying degrees of sweetness. The icecream and cake was balanced with the creme brûlée and meringue . In all, it was a pretty good dessert 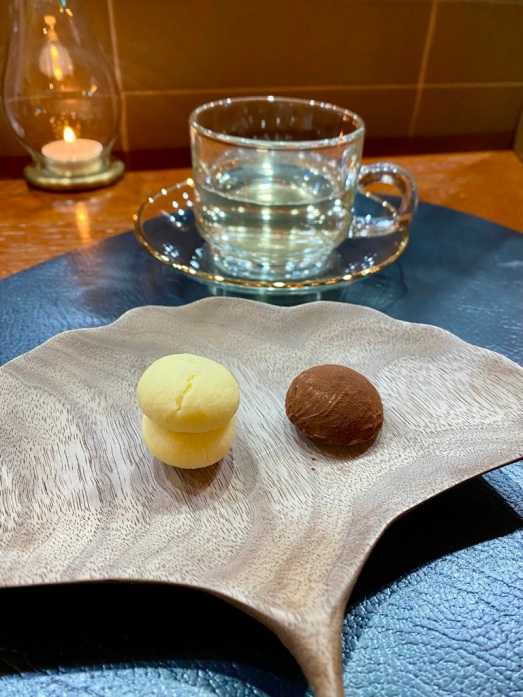 I stopped here for a long while cos I was so full. And then I watched the kitchen in action while the head chef scolded one of his staffs for a long while, and everyone else just scooted to one side doing their work. Ha

I thought the petite 4 concluded the meal on a nice touch. It was decent. I’m not a fan of butter cookies but I did enjoy Muoki’s version. It tasted like one but yet the butter taste was not too overwhelming 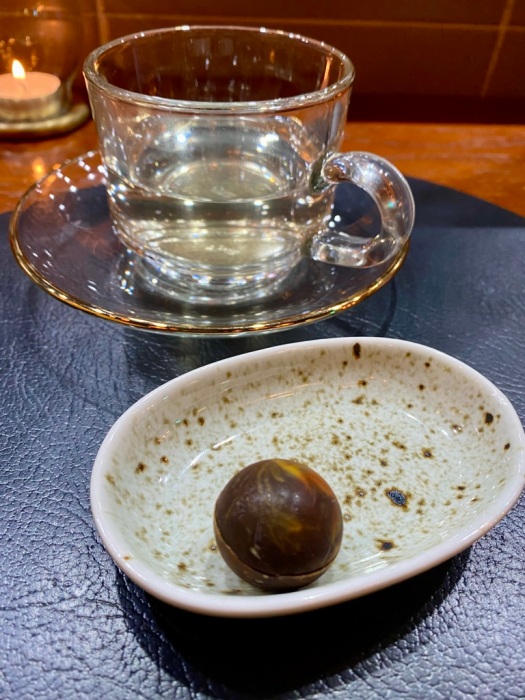 And cos being an international visitor, I got a special dish. This chocolate with passionfruit was amazing. The burst of passionfruit in your mouth concluded with a smooth velvety chocolate taste 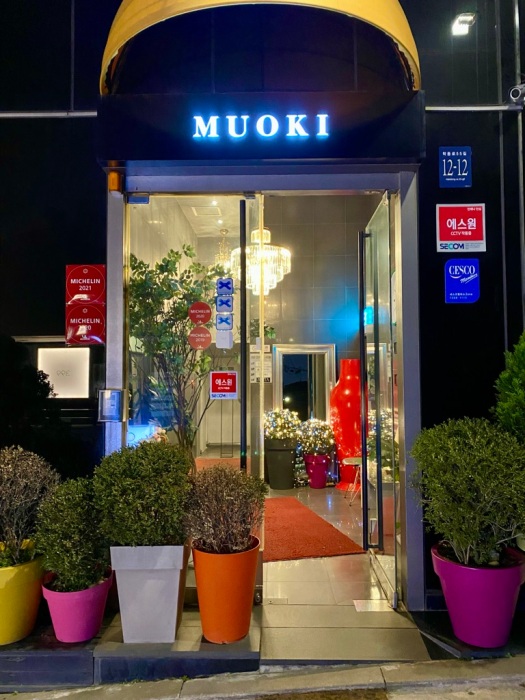 In general, it was a good meal, made even better by the hospitable service. There were hits and misses and I thought if they could have improvements in some of their dishes, their accolades would go up even higher. Still, I enjoyed the creativeness and flavours that were put into the meal and there were some dishes I would definitely love to have again