Ginza Sushi Ichi at Marriott has found a new neighbour, serving Edo-style tempura. Only recently opened in mid November last year, this 8-seat counter restaurant is headed by Head Chef Takahiro Shima. The restaurant didn’t see many diners that day and sometimes the stillness and quietness is a little scary. Thankfully Chef Shima さん interacted with us after awhile so it was quite a fun lunch in the end. The lunch is divided into Take ($100) , Ume ($150) & Lunch Omakase ($240) where you will get your set of appetizer, salad, tempura, meal choice & dessert 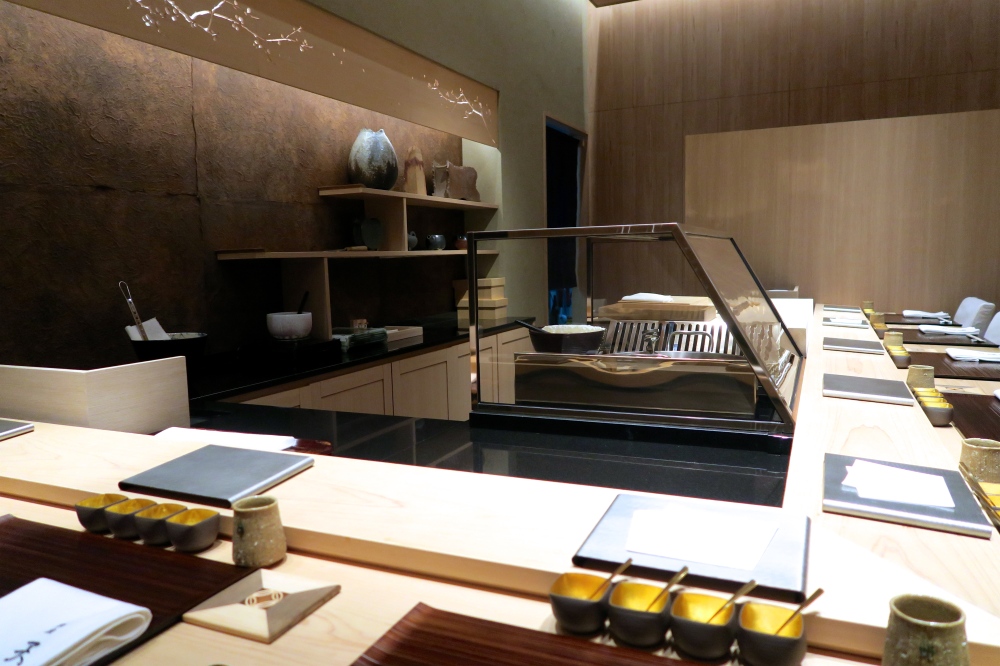 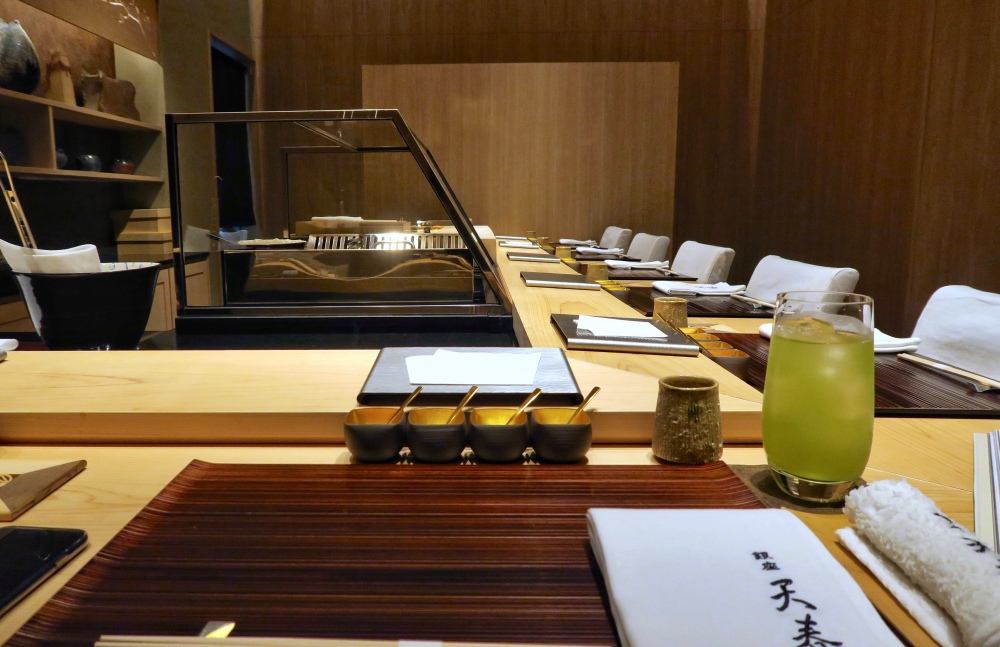 Showing us the dishes of the day! Not that we get to pick, but I like how they present everything so nicely and it isn’t justified to not take a photo of it

The Chef with his knife skills 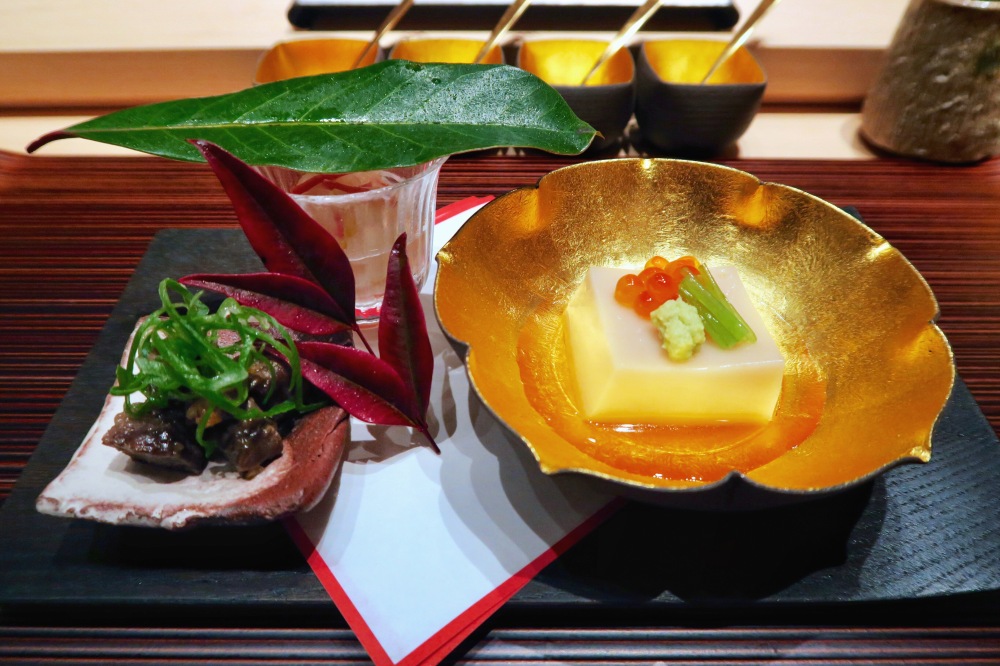 Seasonal Appetizer consisting of Simmered Beef, Marinated Pickles and Sesame Tofu. The sesame tofu was soft, silky and firm with a full sesame taste to it. And it was surprising it goes well with a touch of freshly grated wasabi and finishing off with the sweetness of the roes

The pickles was refreshing and delightful with a citrusy touch to it. The server also explained the importance of the green leaf which signifies the first fallen leaf of the year

Moving on to the condiments which is displayed infront of you. Starting from the right, we have sea salt, curry salt, yuzu kosho and plum

And tempura sauce. The Chef will advise you which condiment to go along with each tempura dish

Ebi. The most popular dish you find in tempura. Contrary to most prawn tempura, this prawn might seem a little small but the slightly firm texture and sweetness comes through the light and crisp texture. Though honestly speaking I wan’t very impressed by it. It was okay but definitely not wow-ed. The mini crab paired with the sea salt gave a feeling of eating potato chip and it was gone in a second 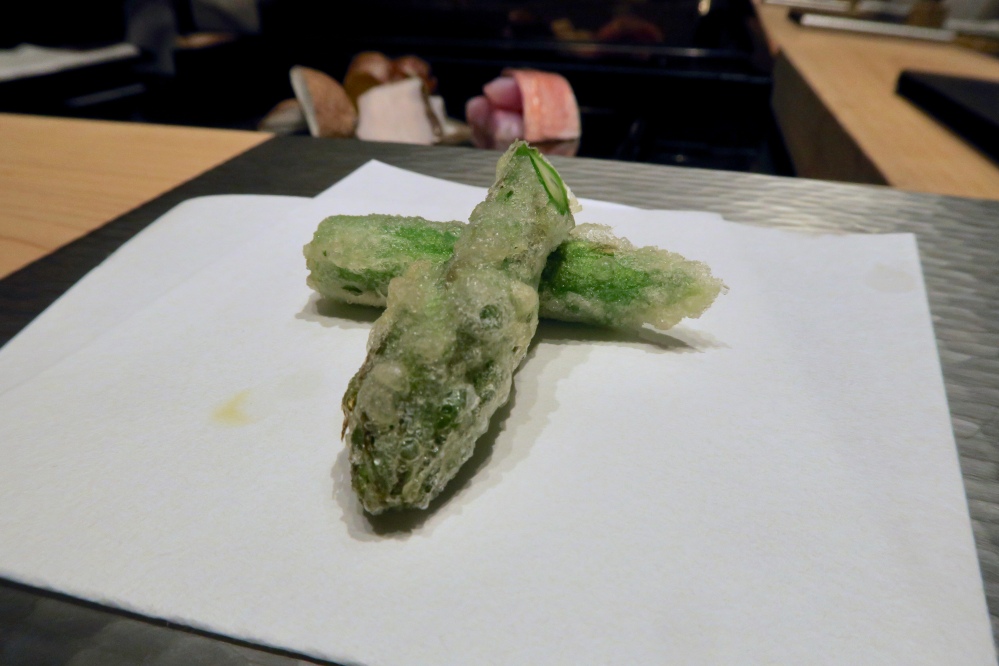 I enjoyed the asparagus with the curry salt. The warm asparagus with a crispy texture and a flavourful end to it was something different and refreshing

The Chef recommended to eat half of this with tempura sauce and the other half with plum and I really like both combination of it. The tai was nicely fried and pairing it with the radish + tempura sauce was so good. The sweet and sour nature of the plum went really well with the fish and surprises in many ways 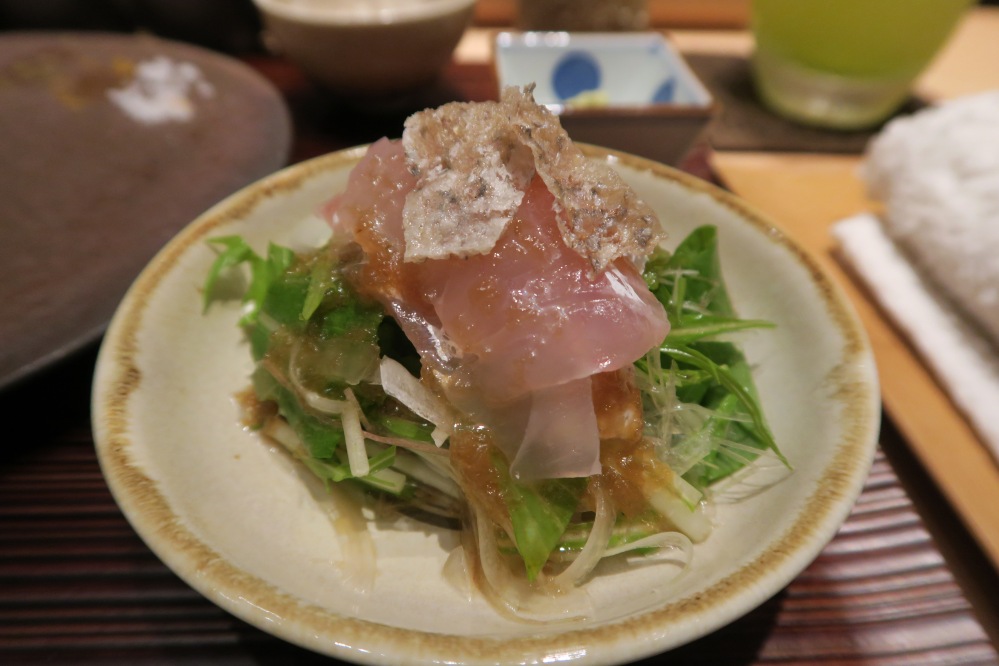 Not usually a fan of lotus root, but the crunchy texture paired with yuzu pepper gave a whole different kind of flavour

When this came, we had lots of question marks. It turns out to be the outermost layer of the tai fish. Similar to the skin, this was deep fried so crisp it was just an amazing dish of its own

The Amadai reminded me of fish & chips. The piping hot meat when you sliced into half, half paired with the tempura sauce and the other half with lemon juice was pretty good 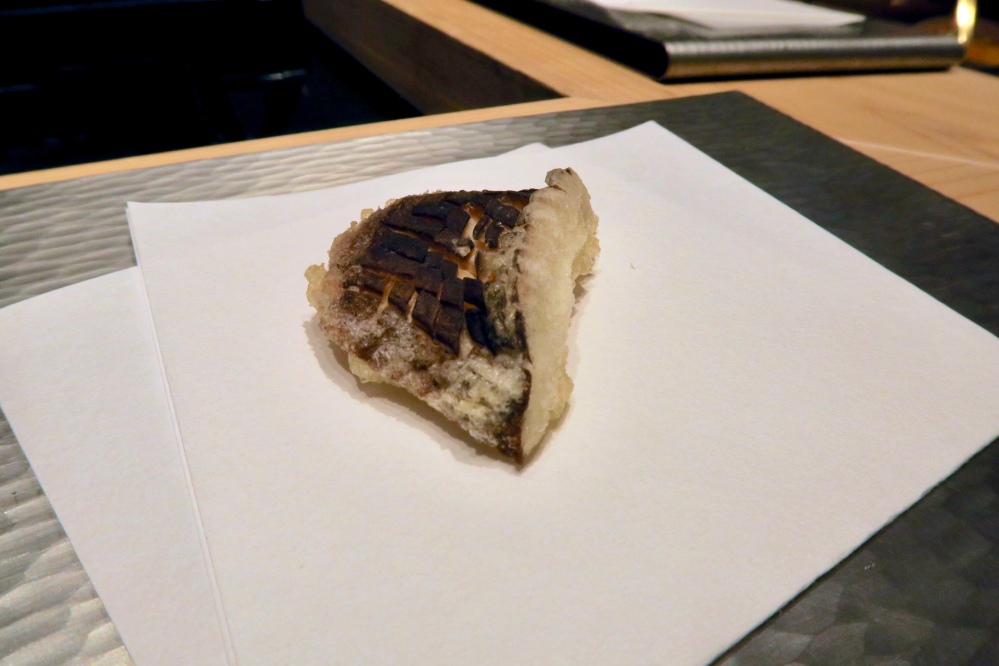 The shitake was a little dry. I would have preferred with a little more juice in the mushroom

The deep fried Anago was a skill of its own. It was moist, firm and crisp

Saving the best for the last is the Japanese sweet potato that was first steamed for 5 hours before deep frying in the hot pan. It was so sweet, so delicious. I can have another 2 pieces of this 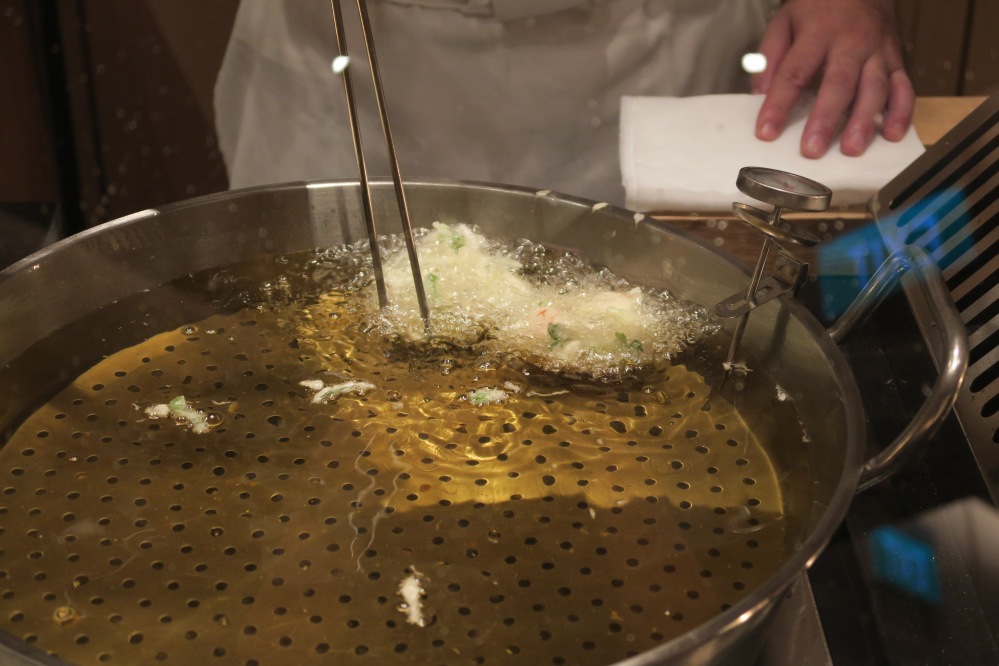 Moving on to our meal choice where we get to pick Tendon (rice) or Tencha (rice with broth), which we picked one of each of course

It’s probably uncommon to find Tencha in Singapore. Enjoyed the sweet broth with touch of wasabi and the changing texture and flavour of the tempura fritter as it slowly soaked up the broth 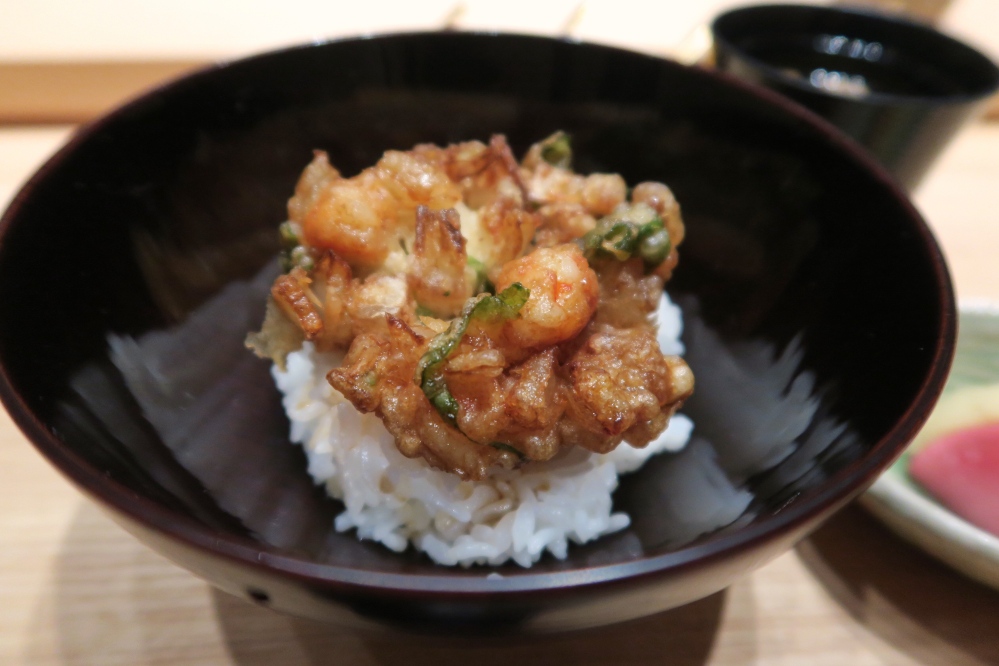 But I love my Tendon more. The sweet sauce with a slightly saltier taste to it, the crispy tempura fritter with crunchy seafood and vegetables and the softness and silky texture of the rice. It was so good I felt like going back there again

Setting for dessert with Japanese bonsai. We were so amused by it initially we thought that could be eaten as well 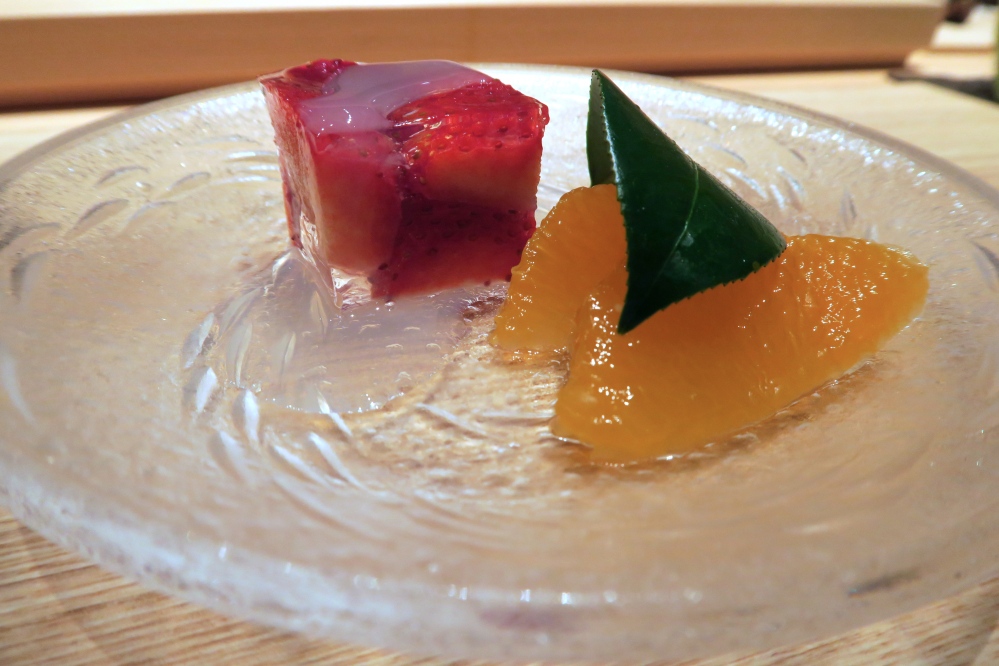 It was simple, yet the sweetness was apt and lingering 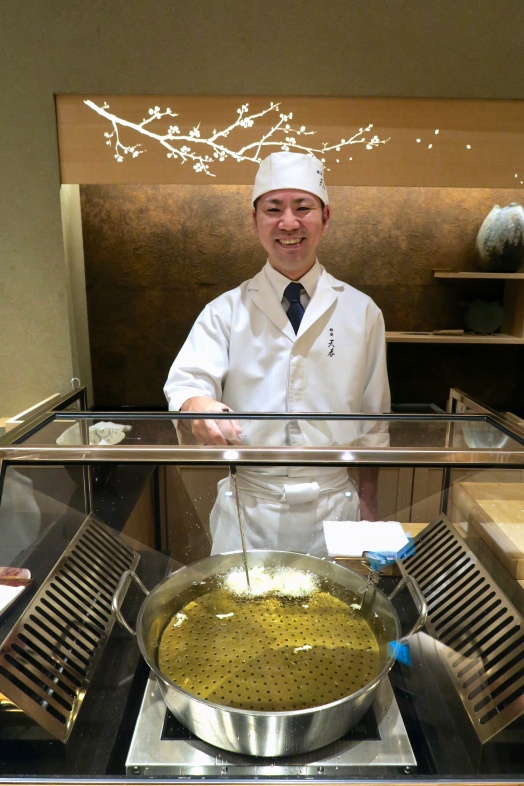 Chef Shima さん posing for me

I enjoyed my meal very much. It might not started out strong but overall, it was very satisfying. The tempura gets better, especially with those fish dishes. The sauce was really good. It was light, sweet and delicious. And even though after having so many pieces of deep fried dishes, it wasn’t oily nor overwhelming. 8 pieces might seem too little at first (or so it was how I thought before I went), but surprisingly it was filling. It might not be the cheapest tempura meal around, but i think it’s worth a visit