Had dinner with the cousins to celebrate the cousin getting married so the cousin suggested Torio at Link hotel. I had never been there before but when I found out we were having omakase for dinner, I was actually excited to give it a try. The place was empty when I reached but soon got pretty crowded at dinner time. It’s a simple counter setup though I wouldn’t say it’s Japanese-inspired. I took a look at the menu online and the price point actually looked pretty reasonable with $138 being their most premium tier. I’m not sure which menu we went for since we definitely had more than what the menu actually offered 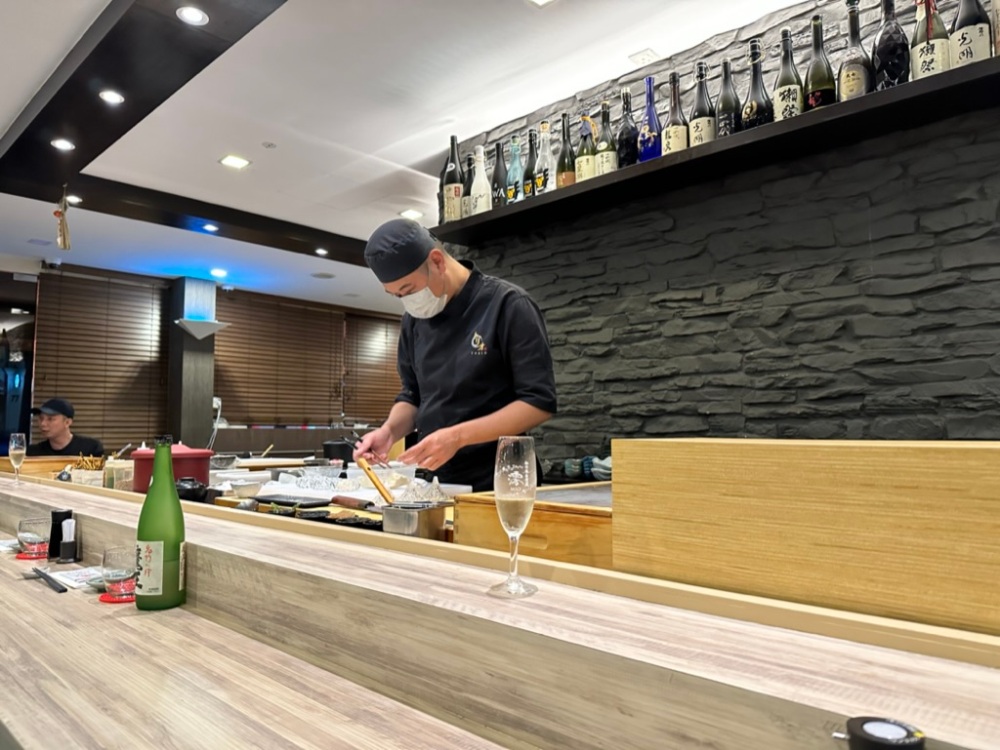 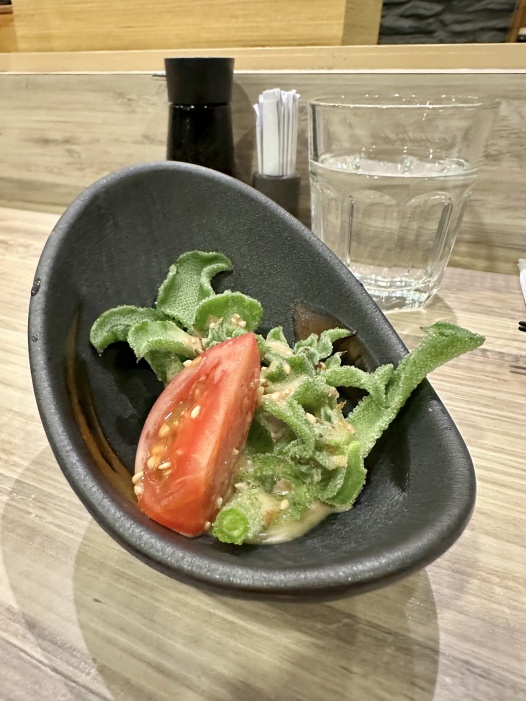 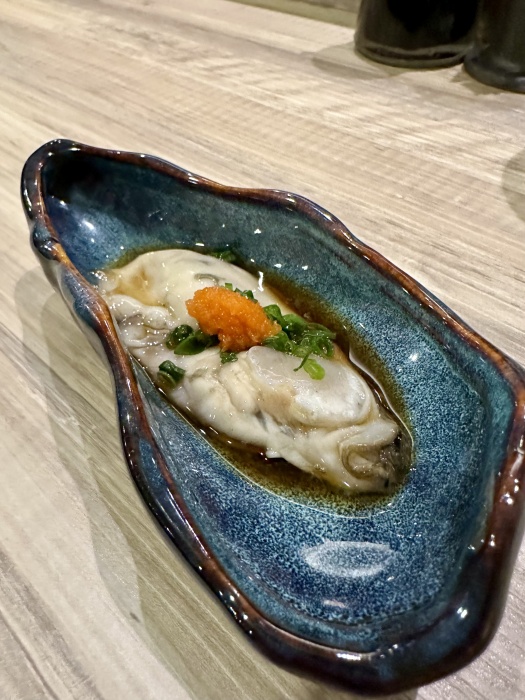 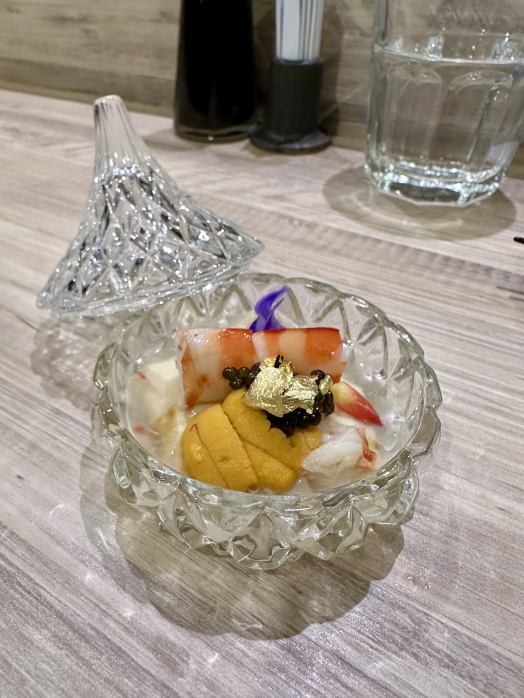 Kurama Prawn, Yuba with Crab Sauce, Bafun Uni & Caviar
Fancy dish on the menu. It was not bad. The prawn was succulent and fresh. But I thought the portion of the uni can be a little more in order to have the whole creaminess in the mouth 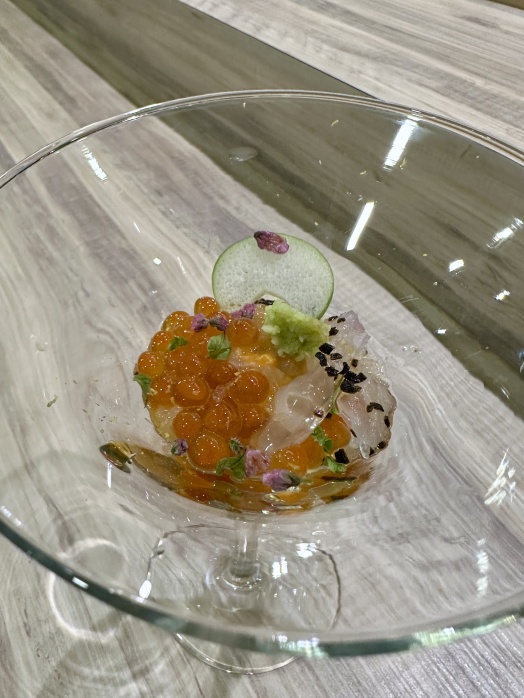 Ika Somen,  Uni, Nama Sujiko,  Jellyfish
The squid was quite tender so it really felt like having chewy noodles. The whole dish with the salmon roes and jellyfish came together quite well and was an enjoyable dish 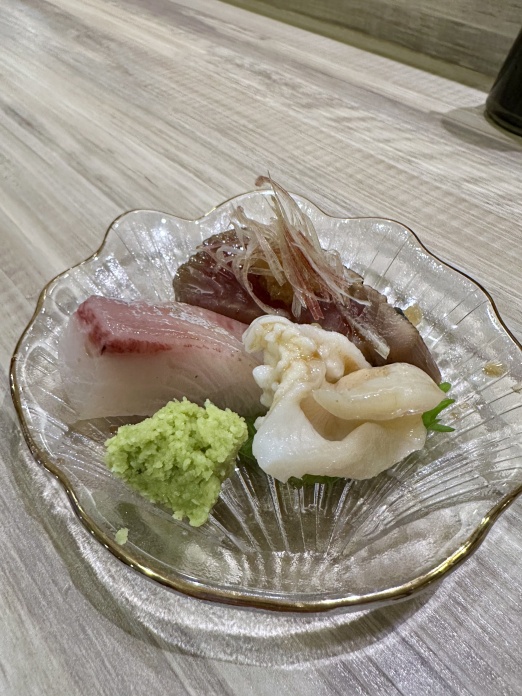 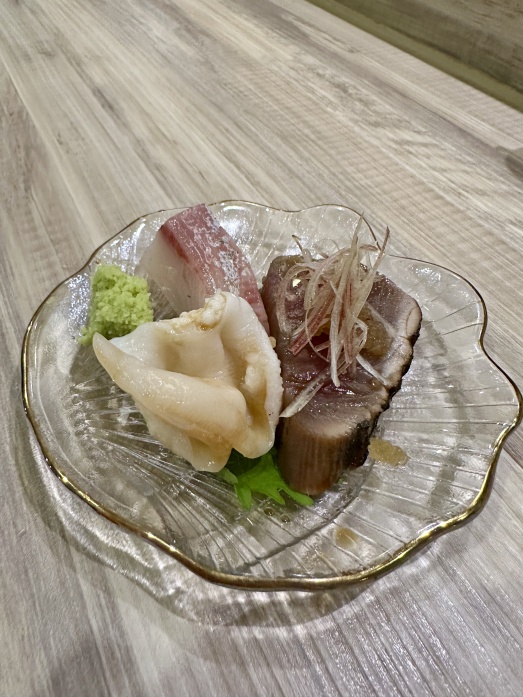 I thought the ichigai was just alright in terms of texture and flavour. But the fish was good 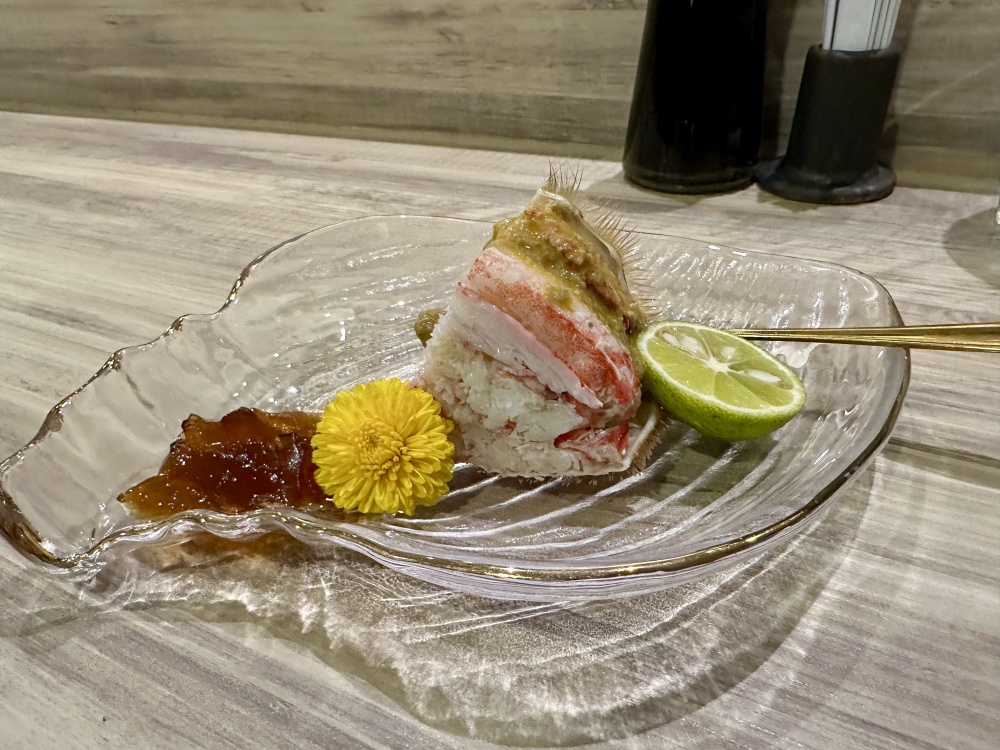 The crab was decent. Thick, chunky, generous portion of meat with a delectable ponzu jelly. And oh, I like the crab roe too 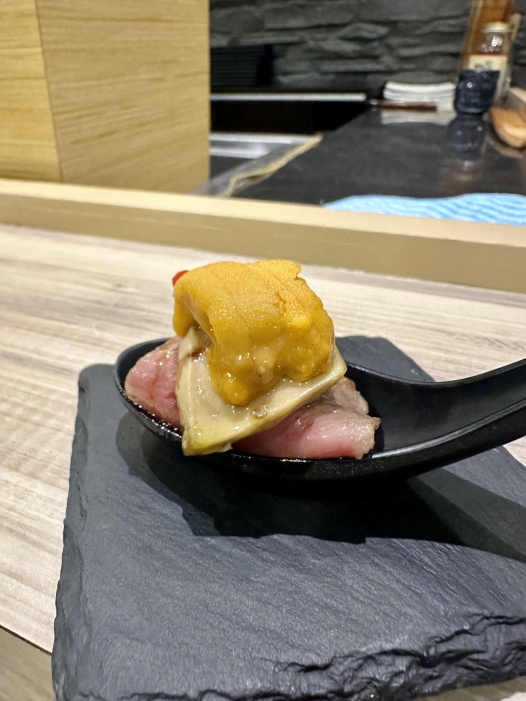 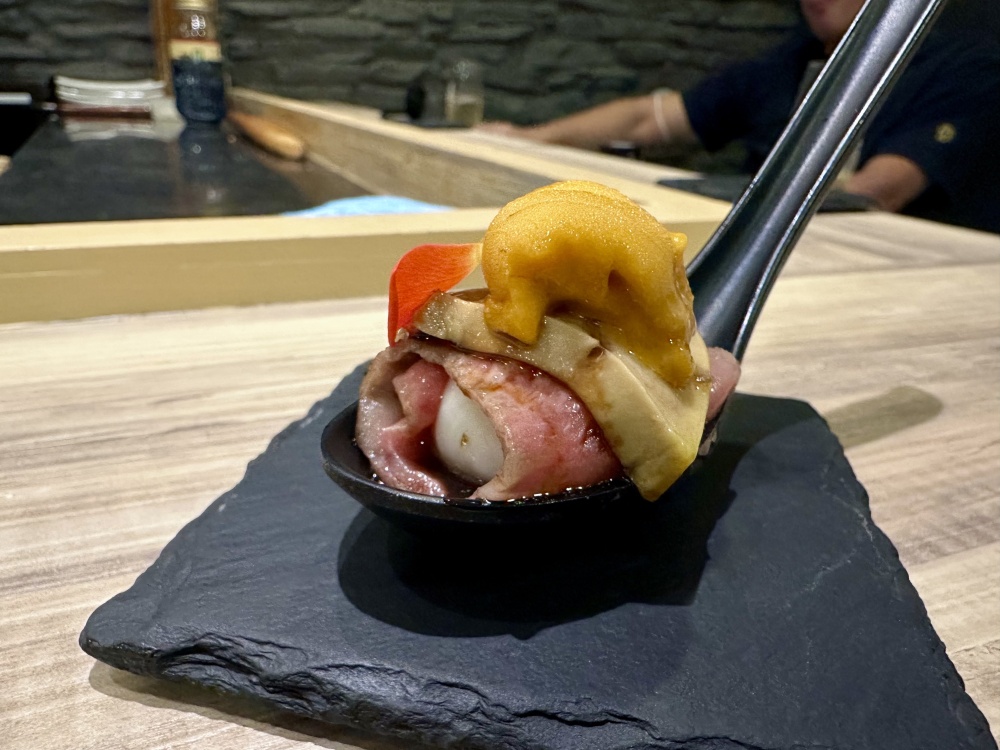 This was by far the best dish. The beef was tender with an after oily-like texture. And the egg burst in your mouth to end it off 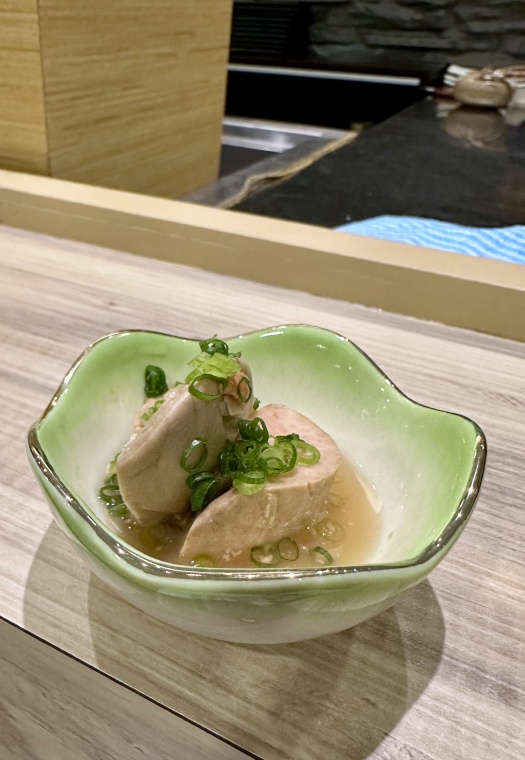 Ankimo
Overheard the chef telling the next table there’s liver today so I requested for it. Lol. The Ankimo was good – very smooth and flavourful 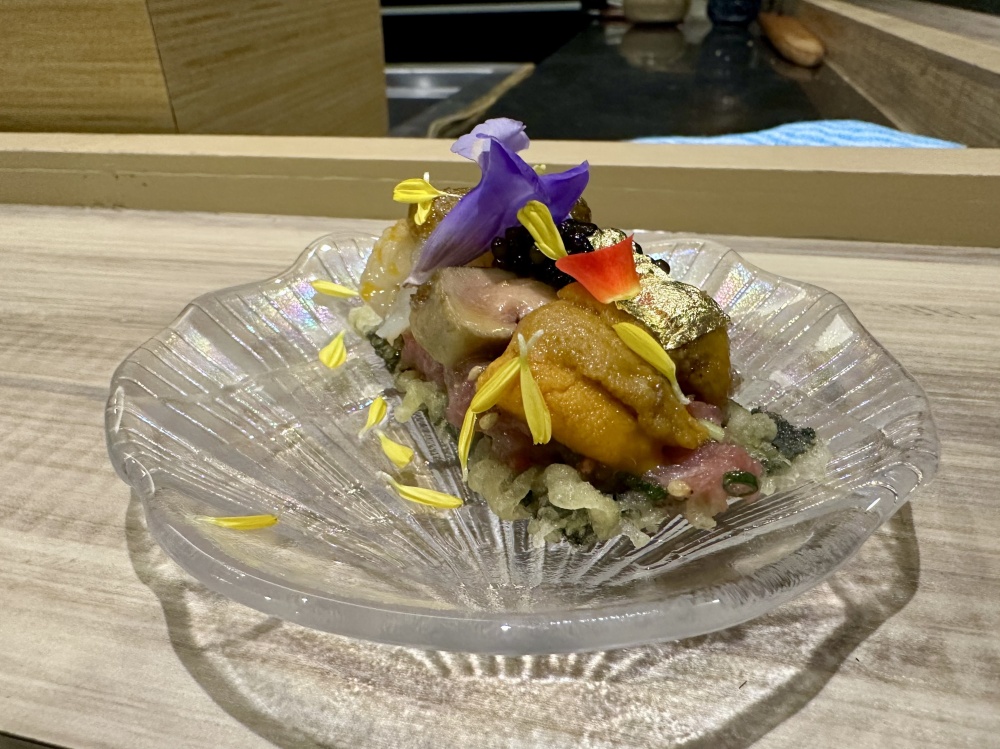 This one felt like a masterpiece with all the fancy ingredients. But I personally I felt it was abit too much. Sometimes simple things work too. The dish was troublesome to eat and it was oily abit. So it wasn’t a good experience eating it. The only thing I like here was the botan ebi which stood out among the rest 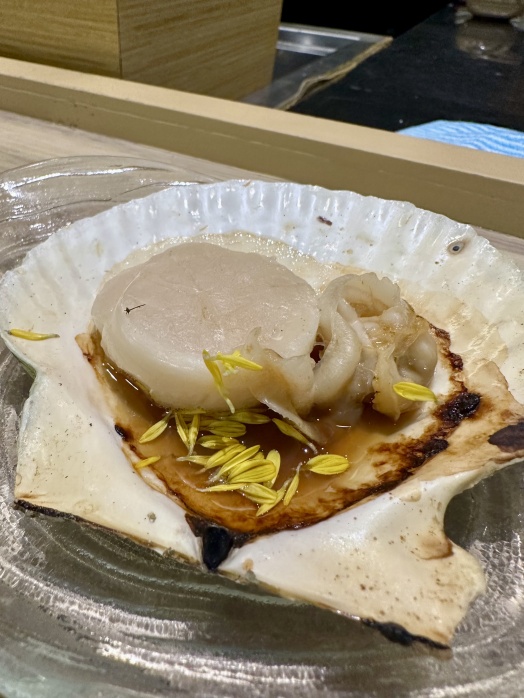 Thankfully after a disastrous dish, the meal was redeemed by the scallop. It was nicely cooked with the below half cooked white and top half translucent 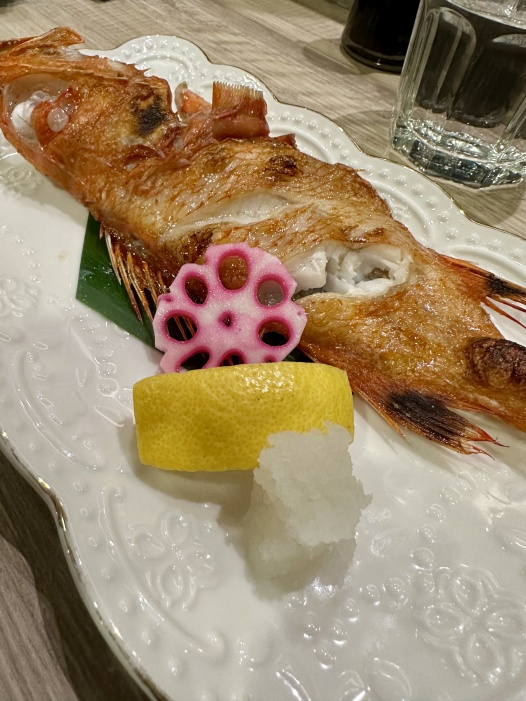 The cousin said this was his favourite dish but I find it abit oily. I mean it was okay and well-cooked but I wasn’t particularly blown away 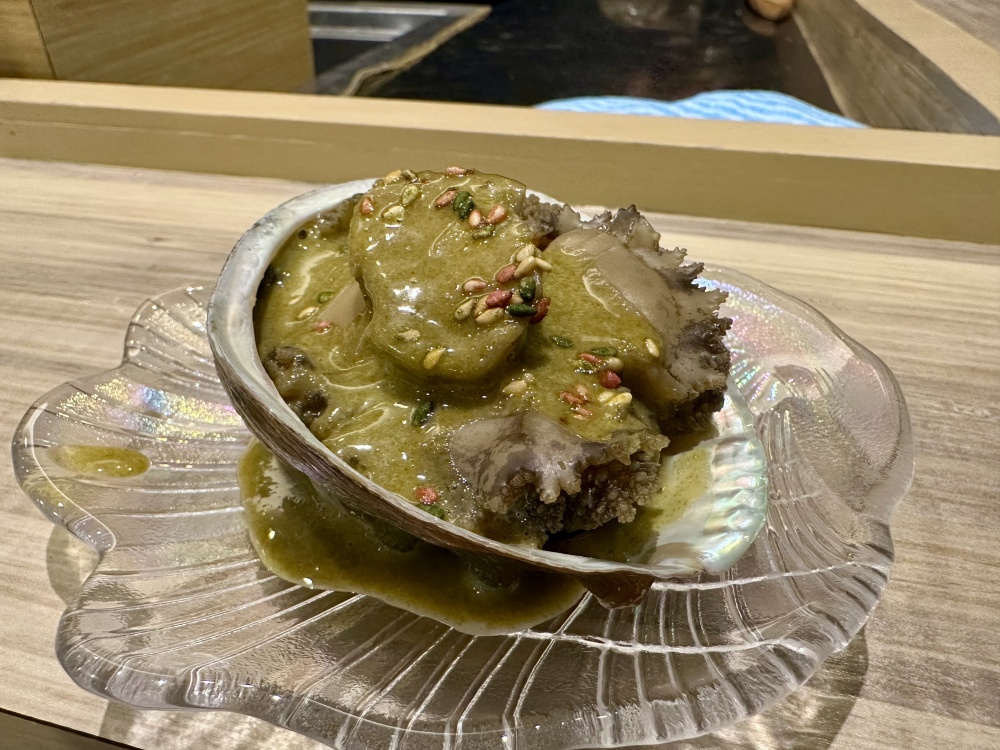 My next favorite dish of this meal. The abalone was good and I really enjoyed the awabi sauce that went along with it 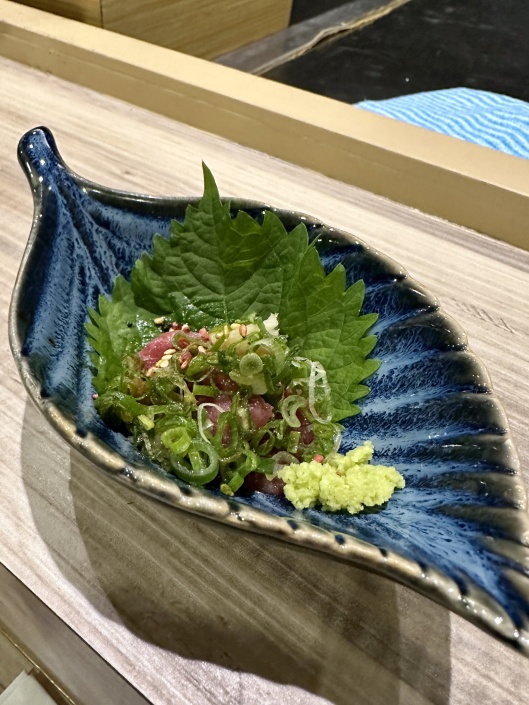 Very Interesting. First time having horsemeat at a sushi place. Lol. Sadly, the salt was distributed unevenly / overdone so the first piece of horsemeat was very salty. But the second piece with ginger was good. And I must say I was surprised by texture being so soft. It really tasted like fish if one didn’t know

And then we were finally ready to move on to the sushi, like finally. I thought we were never going there. I requested for some gari to start cos I felt like the first part of the meal was a little heavy. However I was a little disappointed by the gari. I felt that it was too spicy and just not sweet enough 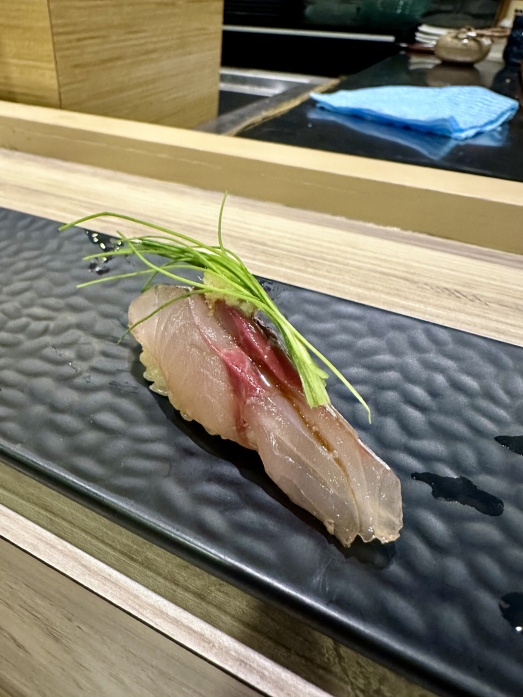 My favourite piece of fish. But sadly, this was not aged enough and you could tell. Also, it would be better if it was a little fattier so the whole piece of sushi was just meh. The rice was okay but maybe the vinegar can be a little stronger 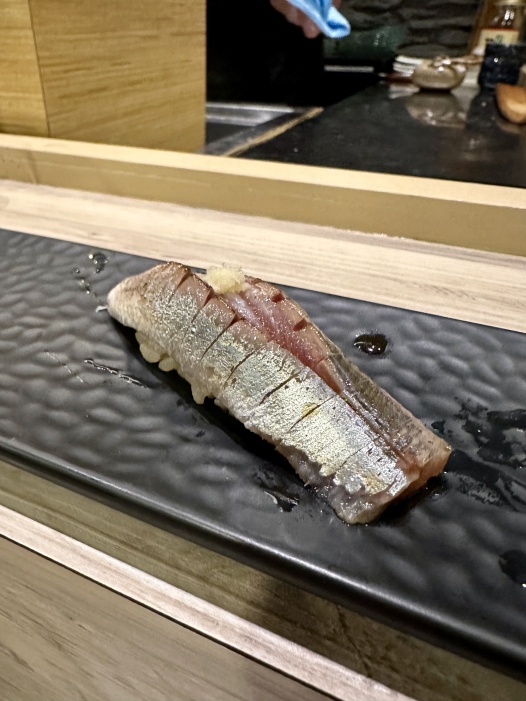 They said I should tried the Iwashi if I like aji. I mean I do like Aji but after trying their Aji, I had my doubts. Lol. Thankfully, this Iwashi was better than Aji in terms of flavour. So it was a little more satisfying 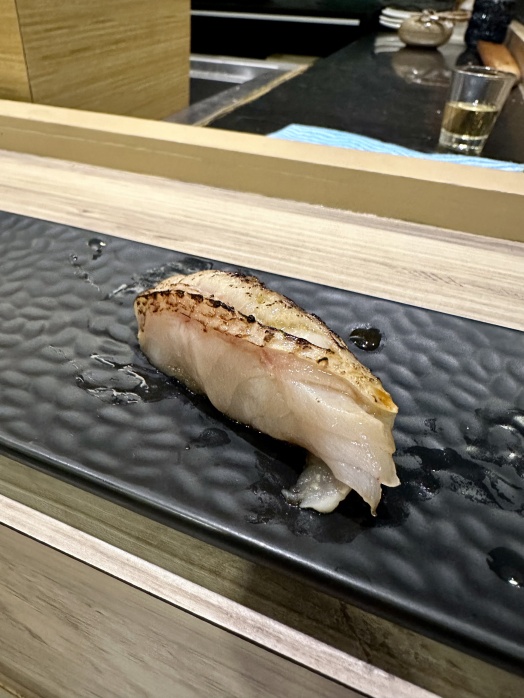 The nodoguro was not bad. It was oily, smokey and for a mid tier kind of standard, I find it decent 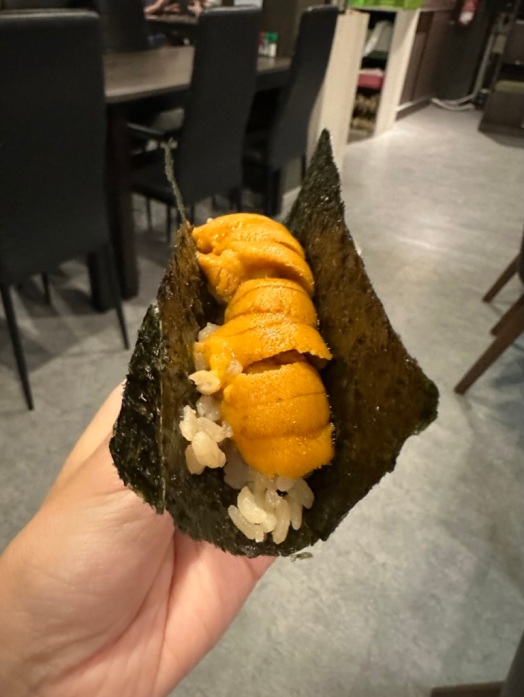 Cos one can never have enough uni 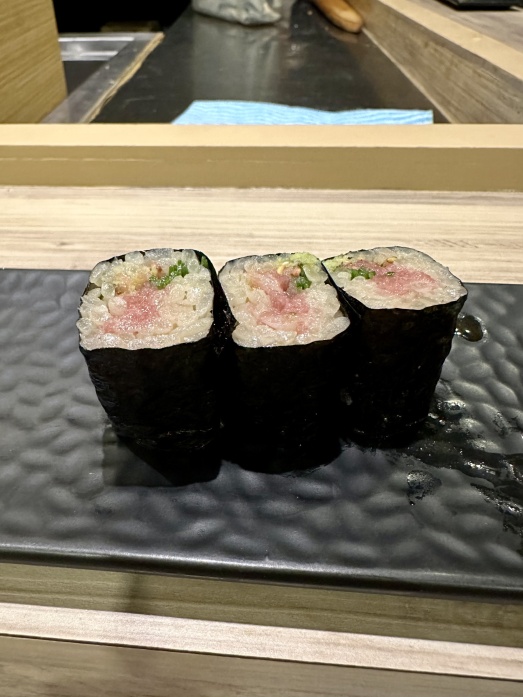 Very normal. You can skip this. But if you had too many drinks and needed food, then maybe you can have some of this. Lol 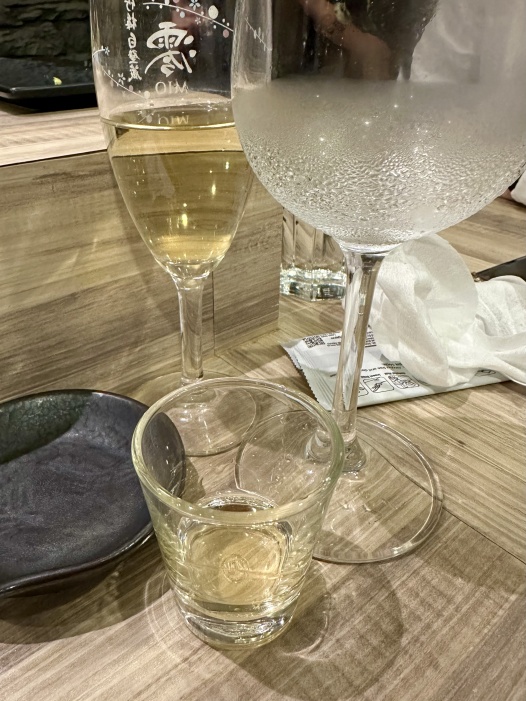 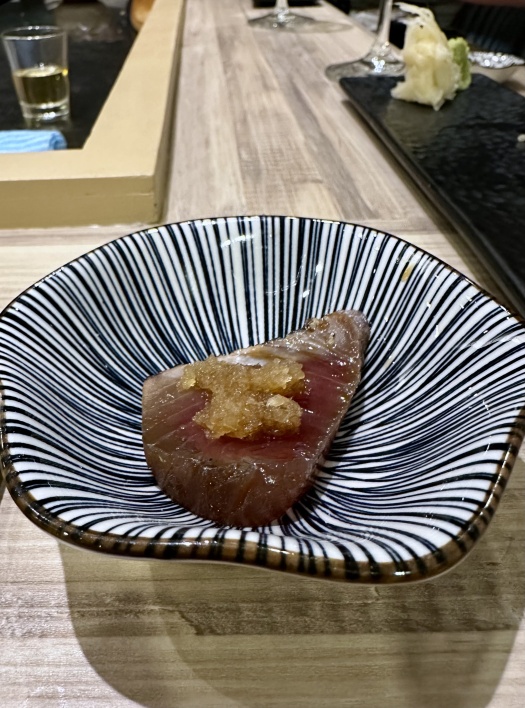 So we had some random sashimi from the chef and added tempura cos it was just too much drinks and the cousins were barely managing. Lol 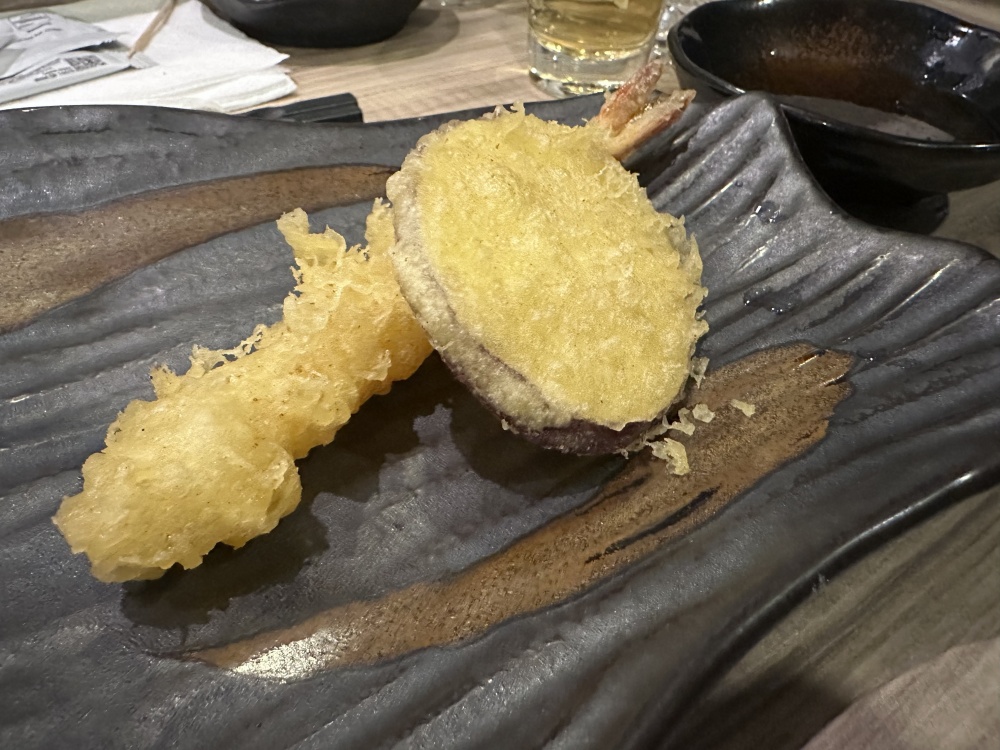 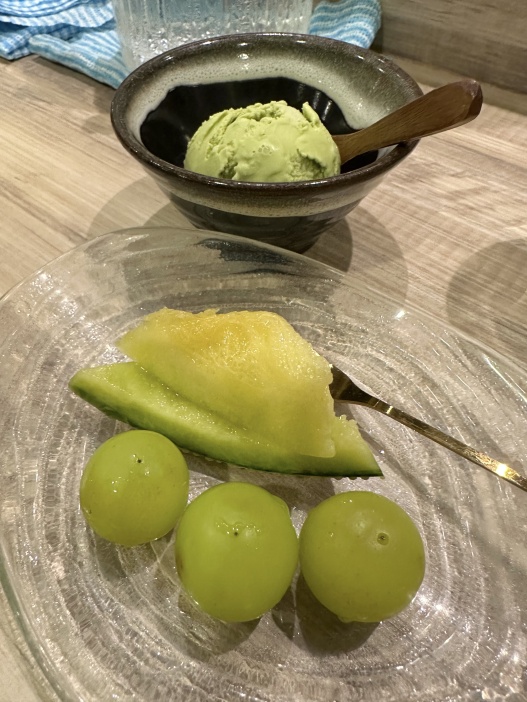 And finally ending with desserts. I had both the fruits and icecream but in all honesty, the fruits were better

Torio feels like your friendly neighbourhood Japanese joint, like if you want something better than those chain restaurants. They do have some decent and quality dishes and for such prices, it’s actually very reasonable. Do note that counter seats are not guaranteed for omakase and that’s something I am very particular about. So if you don’t mind seating anywhere and just want a weekend family get together for a Japanese meal, you can give this a try