Not to be confused with Cable Ski Park in Batam, Batam WakePark is pretty new and was only opened in March 2017 and I thought I will write about our day trip there since there was little information/reviews about it online. So it all started when the friend and I said let’s do something different for our birthdays this year and so, cable ski it shall be since both of us have never tried this before. Call us adventurous.

We booked online through their website and was liaised using email. The 1-day package includes ferry transfer (2-ways), to-and-fro pickup, lunch and 1 whole day of cable skiing at IDR 1,200,000 (or SGD110). Payment can be made in cash or bank transfer. We chose the former. When booking has been confirmed, you will receive the confirmation code which you can collect your boarding passes at Harbourfront Ferry Terminal. The ferry that was booked for us was Horizon Fast Ferry located at level 3 of the terminal. It was fuss-free and super fast cos there was literally nobody in queue. The ferry timing to Harbour Bay (Batam) terminal is fixed at 9.15am but you can choose the return at 5.50pm or 7.15pm. We figured we would be too exhausted so we took the earlier return

Cos we had so much time, we had breakfast at Macs to fuel up for the day ahead before we went to the holding area to wait for our departure 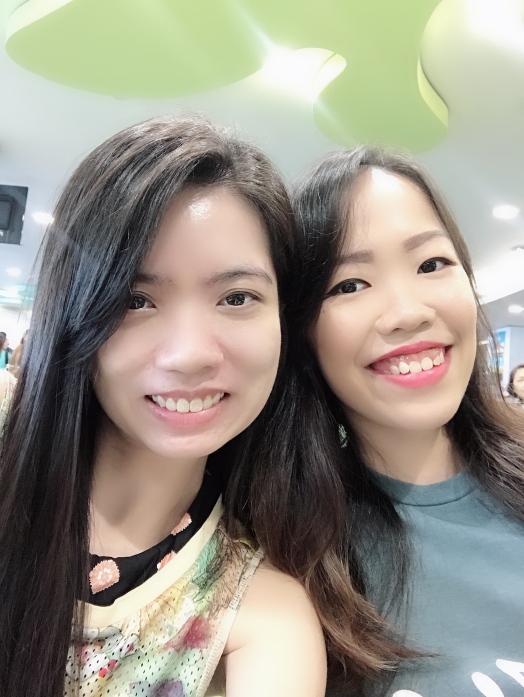 Morning selfie before we depart! 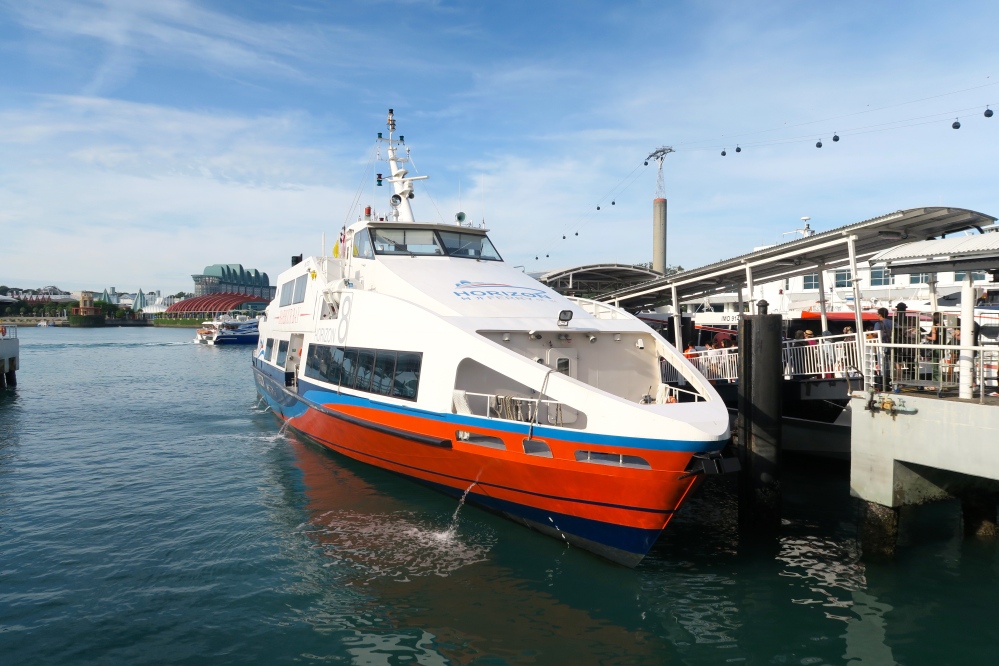 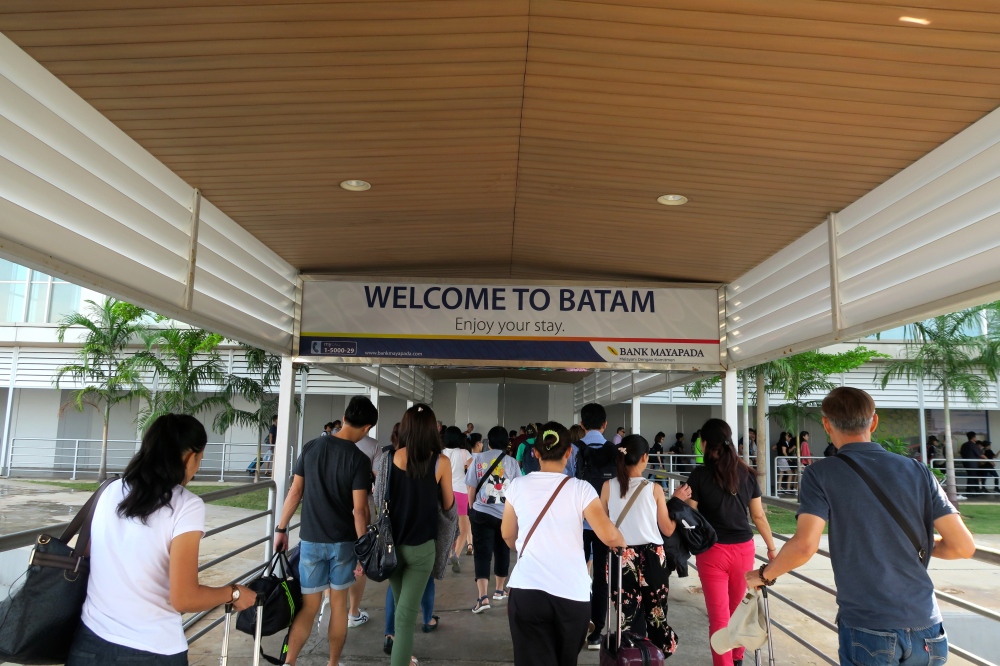 There was lots of people, so much that the line to clear passport control took a long time. Upon exiting, we found the guy with a sign that says ‘Batam WakePark’ but spend some more time waiting for 2 other people who has yet to turn up. Oh and FYI, you can actually get drinks from the terminal to bring to the park. Well, that was what some people did

Car that picked us up

The park was located about 10-15 minutes away from the terminal and when we exited from the car, the driver said “Welcome to the Jungle”. I lol-ed

The jungle is pretty much like this. It’s the first clockwise system to be used in Indonesia (as compared to other parks that used anti-clockwise) with a full-sized cable system. So this area is where you do knee boarding and for amateurs/professionals that can ski pretty well

Separated by a rest area/canteen, this is also the place where you drop off your personal belongings. There are no lockers and the staffs said, oh don’t worry, it’s pretty safe. Right. 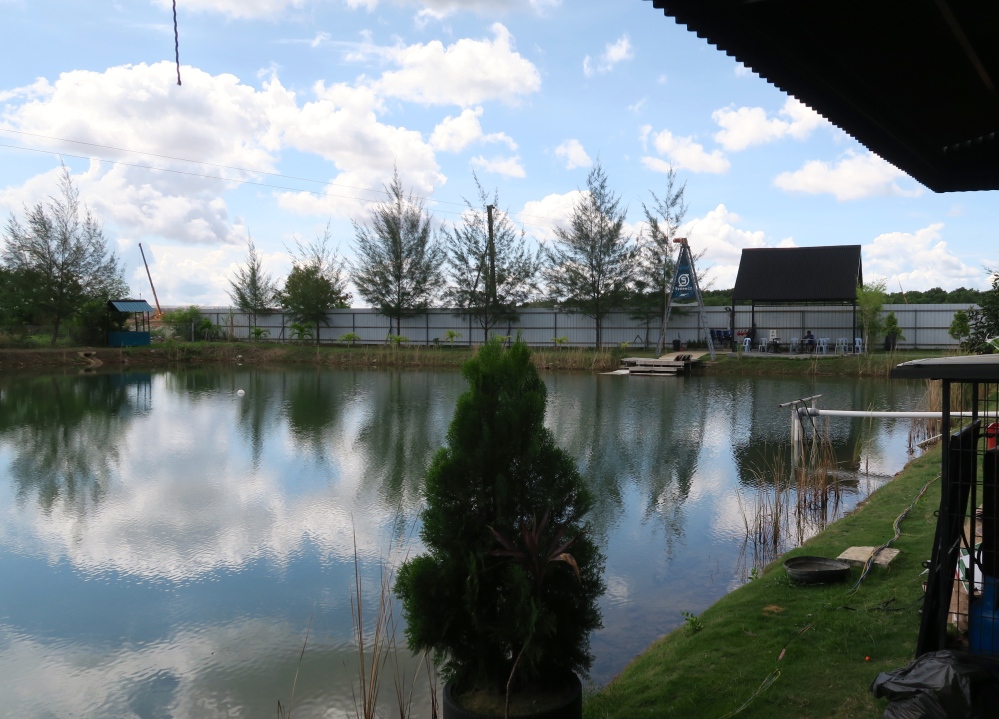 And when you cross over to the other side, this is the beginner’s lake! Where people like us with 0 experience learn how to ski for the very first time

I think they could have done better for people with their first visits cos they literally expect everyone to know what they are doing. So after you registered at the reception, they would give you your lunch voucher as well and you can just drop your belongings at the rest area. Then, grab a life vest and helmet at the far right where the main ski area is and you are off to play/learn!

We went to the beginner’s lake to learn how to fall. I’m kidding. Though that was pretty much it half the time but I was pretty pleased with myself for being able to squat and not fall on the first attempt. I actually made it across the lake! But subsequently, we got so tired from all the falling and we just had no strength to keep it going. So we call it a break cos our hands were suffering from blisters and I pulled a muscle. We spent some time catching our breath and watching others ski cos the way they do it make it look so easy! Before the staffs jio-ed us to do kneeboarding and we were like.. is it difficult?? LOL. Obviously they said no. Well, it really ain’t that easy either. If cable skiing is at test of leg strength, kneeboarding is a test of arm strength. We decided that we had enough and went for lunch instead since the kitchen opened at 12pm 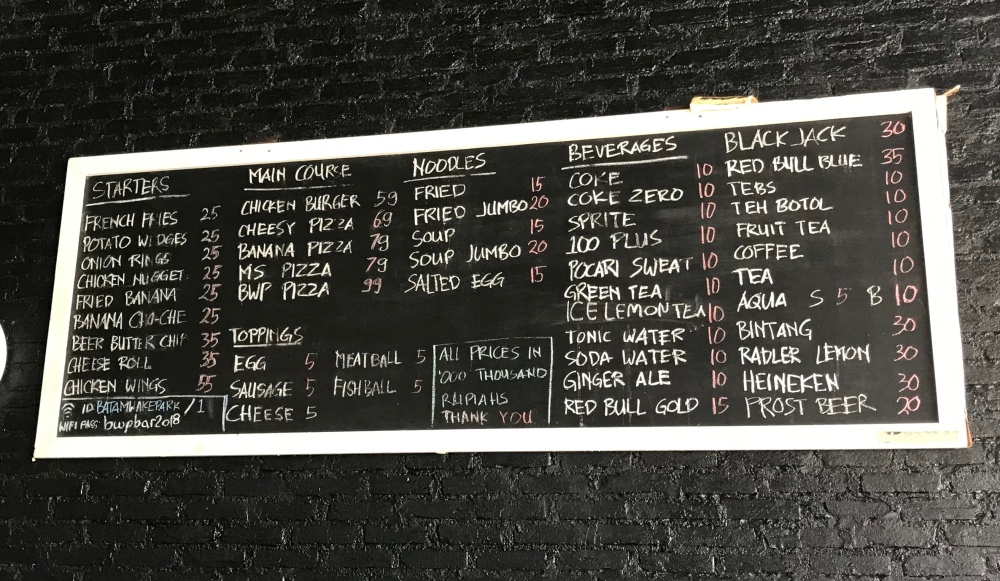 And here comes the joke. All I heard was oh, you can use the lunch voucher to claim any drink below 10k and so I thought the lunch voucher can only be used for A DRINK. In my head I was thinking how can a drink can even be considered lunch?! So I went to order fried noodles and nuggets and when I went back to table, I asked the friend ‘Aren’t you eating?’ and she said ‘Yes, I am. But they are serving us right?’ And then I realised there was a lunch set. Right.

On the bright side, I’m glad I ordered extra cos the lunch set looks like this. Rice with fried egg, dubious triangular-looking supposedly chicken and a bowl of soup

The soup was probably the most decent looking dish. The friend said this is chapalang soup with whatever you can find from the fridge. LOL. Well to be fair, it didn’t taste as bad with cabbage, potatoes, carrots, pasta bits and one piece of chicken

And then my mee goreng came 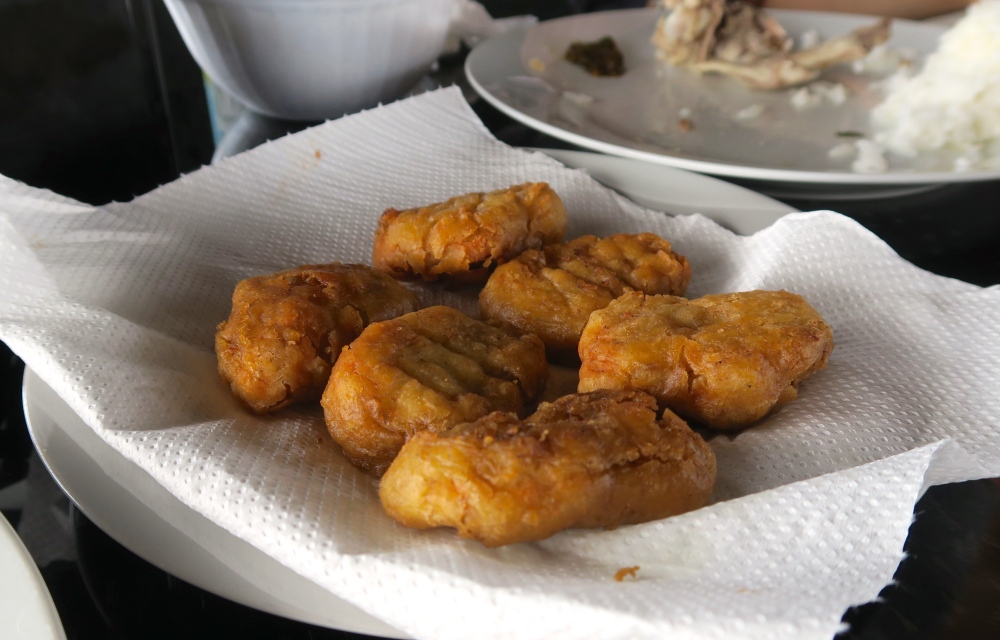 Along with fried nuggets

Well lunch was a pretty relaxed affair with Blackpink song playing in the background, joined by a house cat which was loitering around us for food and a pack of houseflies that was hovering nonstop. I spent the next half an hour napping with the food coma hitting me while the friend caught up with life on the phone cos there was free wifi at the park

And then we decided we shall go back to the water, this time using the gloves we borrowed from them so our hands don’t hurt that much 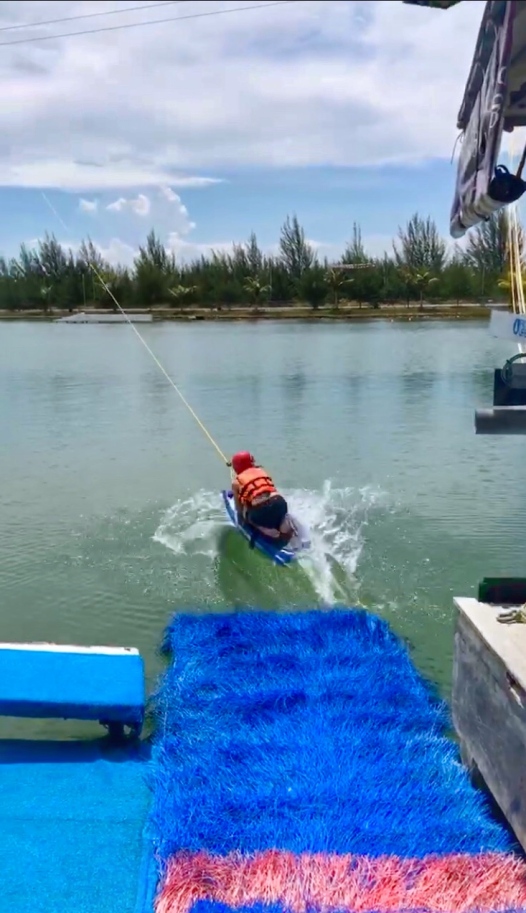 Screengrabbed from our videos! Definitely more successful after lunch as I made it 3/4 of the lake! Whoohoo. Though I kid you not, it’s really tiring. I was kind of glad when i fell into the water. It was like omg. I can just float right now and not move. HAHA

But we decided to go back to the beginner’s lake where we met a newly arrived Diva who entertained us half the afternoon. So while waiting, she kept going she was so scared again and again till the staffs were so annoyed they asked if she cared of sharks?! I was trying not to laugh. Then she asked if she could just go halfway cos she didn’t want her hair to be wet, I kid you not, there was a moment of awkward silence and all of us were just like staring at each other. While waiting, she kept going on about who was gonna take her photos while she’s on the board. I thought the question was largely directed at me since I was the only other person there. So when she finally came back to shore, she was so upset that she broke her nails that she just did I went unsympathetically ‘Oh Dear’ while the friend turned to me and said ‘Shouldn’t she do her nails after cable skiing?! What was she expecting?’ I lol-ed and said, clearly she wasn’t thinking

That aside, I was a little more successful the second time. So proud of the beginner in me. HA. But we were really trying to remember all they told us. Knees bend, hands straight, do not pull, do not go backwards, do not lean too forward, stand up straight, use your front legs, look forward, don’t look down. Bro, this is like examination man.

It took lots of tries before we could manage it. But moral of the story is: Don’t. Give. Up

It was a pretty fun day out since there was only 7 guests at the park that day. We also concluded that we would return but with gloves, salonpas and plasters. But I think we were unused to cable skiing so we were suffering for quite abit. The second try would be better, I hope!

And I decided to call it a day cos dark clouds were looming and my leg was really hurting then. They had a massage area as well though I’m not sure if it’s opened for use and a kids’s playground at the far end 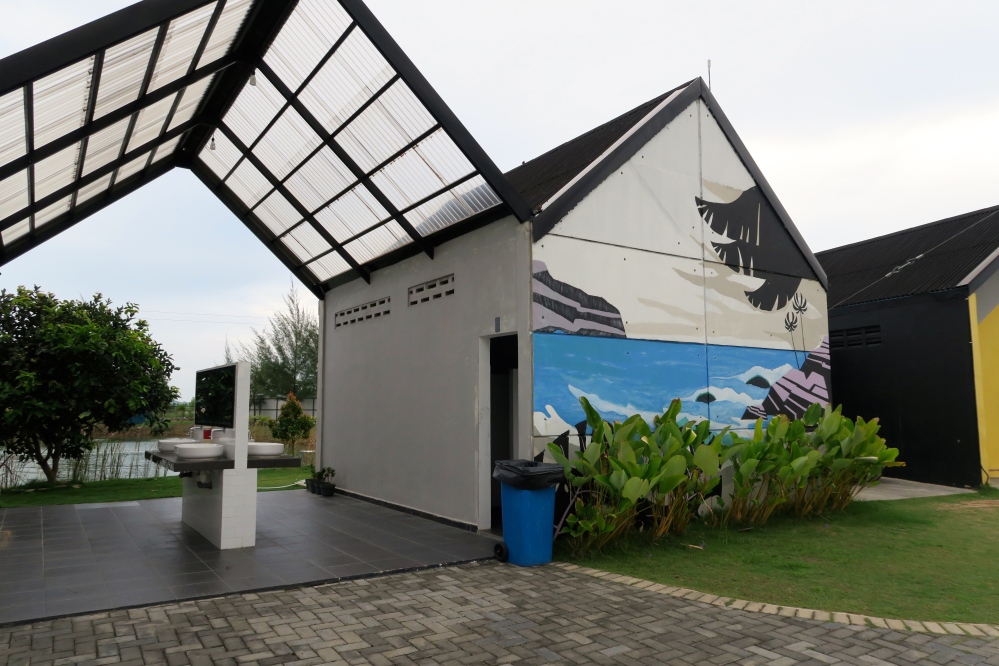 So off to the showers! 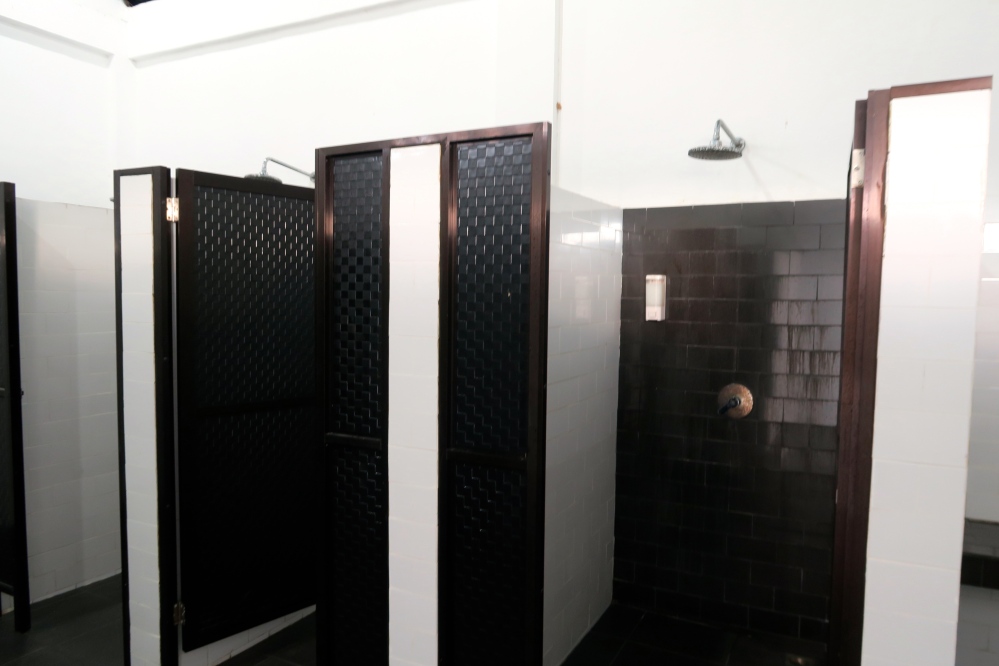 Don’t expect much either! The piping was having some issues so the water wasn’t going down. It was a very simple but still clean shower facility

And then we were driven back to the terminal where you collected your boarding passes from Horizon Fast Ferry before catching our ferry back to Singapore. Trip back was uneventful though we were suffering from the aftereffects of one whole day of cable skiing.

So that was it. I think it’s still fun cos it wasn’t crowded and you don’t have to spend much time waiting. But the same couldn’t be said if the park becomes too crowded. So go while it’s still early!